Fifth in a series on how weather impacted and changed world history.

Queen Elizabeth was a wonderful leader and tremendously strong Queen of England. She had astounded others with her vision for England both domestically and in the world. However, she was going to be tested for the dominance of Europe by the Spanish in 1588.

The Spanish were bent on defeating the young Queen and invade England to create a Catholic Europe. And they had the strength of manpower and ships.  Phillip II was awkwardly related to Elizabeth in that he wasn’t Elizabeth’s real father.  Phillip was Catholic and Elizabeth was Protestant. Phillip was King of Spain. He wanted to test his step-daughter.

In early July the Spanish fleet set sail. The English fleet lay in wake of seeing the Spanish. By mid-July, the first ships had been seen.  Initially, the campaigns were back and forth. Yet, the Spanish made a long trip even further by sailing up and around Scotland. It prolonged their return to Spain. As they made this turn around Spain they made a navigational area that sailed their ships directly into westerly winds and to compound that they were the equivalent to a hurricane.

Ships were destroyed. Men were killed in the thousands. And the English took thousands of Spanish prisoners. The end was near for the Spanish.

And England remained Protestant. Elizabeth was now a touted world leader and someone to be feared. 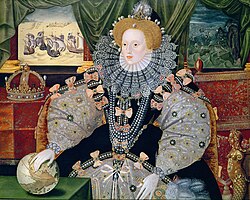